The recognition of the BoltPilot® system with the European Union Seal of Excellence, news in La Voz de Galicia.

The newspaper echoes the evolution of Texas Controls, which aims to consolidate itself as a benchmark company in the wind sector, and which already accounts for around 40% of turnover.

The BoltPilot® system is an important step in this field as it is a management system designed especially for the wind sector that guarantees the integrity of the bolted joints of wind turbines. How? Guiding, controlling, recording and validating all the critical tightening processes of a wind turbine. The control of the tightening work can also be done from anywhere.

Construction and maintenance control has been carried out in more than 35 wind farms with this system, in countries such as Spain, Germany, Denmark, France, Argentina, Chile, Brazil and Mexico.

Last but not least, it has been the recognition of the BoltPilot® system with the European Union Seal of Excellence. The Seal of Excellence is an element of recognition granted to those projects selected for their high technical quality, in a highly competitive field such as the Horizon2020 aid program.

You can read the news here. 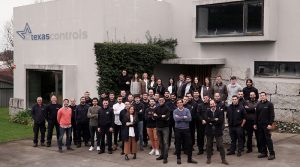