On the 21st of January, Expansion was interested in the growth the company is experiencing, with the focus on the development of technological solutions.

The BoltPilot® System shines with its own light and is already operative in 40 wind farms in different places of the world, from Mexico to Argentina, through France and Germany. This system, unique in the market and recently recognized with the European Union Seal of Excellence, defines the complete wind farm and the critical joints of each wind turbine, captures the data automatically through the tightening machines and dumps them through smartphones in the cloud. In words of the CEO, Frank Fernández, “The system avoids risks and uncertainties, in fact, we have seen cases in which insurance has reduced risk premiums for using it; the other saving is 30% in maintenance times. ”

The FlangePilot® System is also reaping its success, with a very good reception by leading companies in the Oil & Gas market such as Repsol, Galp, Cepsa or Motoroil Hellas. This system was developed to optimize the flanged joints of plants, in some cases with up to 100,000 non-permanent joints, providing a complete database on all aspects that affect the flange, from processes, materials, assembly and tightening procedures, photographs, to all historical data on previous interventions, replaced materials, observations, recommendations, who, when and how and much more.

The growth prospects are encouraging and the Danish delegation is already operational, close to the major engineering hub in renewable technologies, which adds to those delegations already operating in Argentina, Brazil, Mexico and the US. Meanwhile in Spain, the expansion of 2,000 m² more of the facilities in Bergondo is already underway.

The most valuable thing for Texas is people, so we want to highlight that throughout 2019 the company has overcome the barrier of 100 people in the workforce, with 17 new jobs in Spain related to engineering, programming and digitalization, a number that could be repeated during 2020 according to the forescasts. 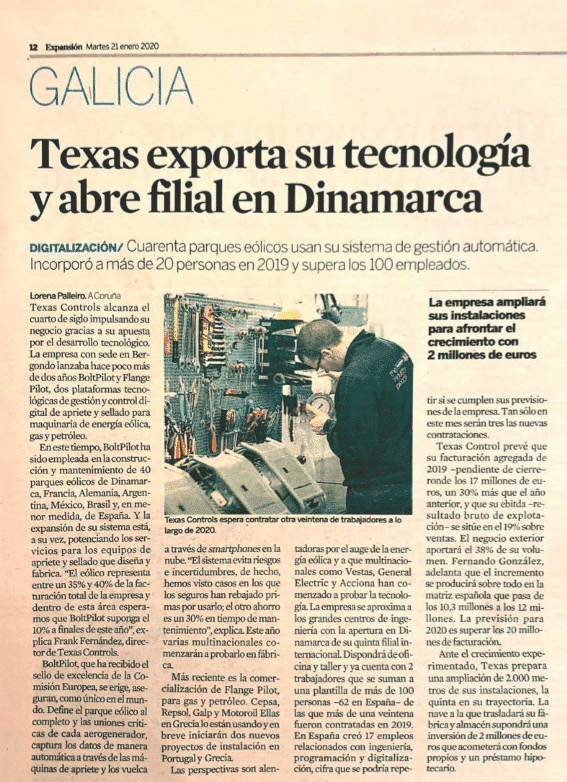